Review of the first Mission Innovation Austria (MIA) Online Event (23 April 2020, 9:30 – 16:00, Online) with over 400 participants. The afternoon session was hosted by the JPP ERA-Net SES. Further details and the presentation slides of the session can be found on the MIA website. 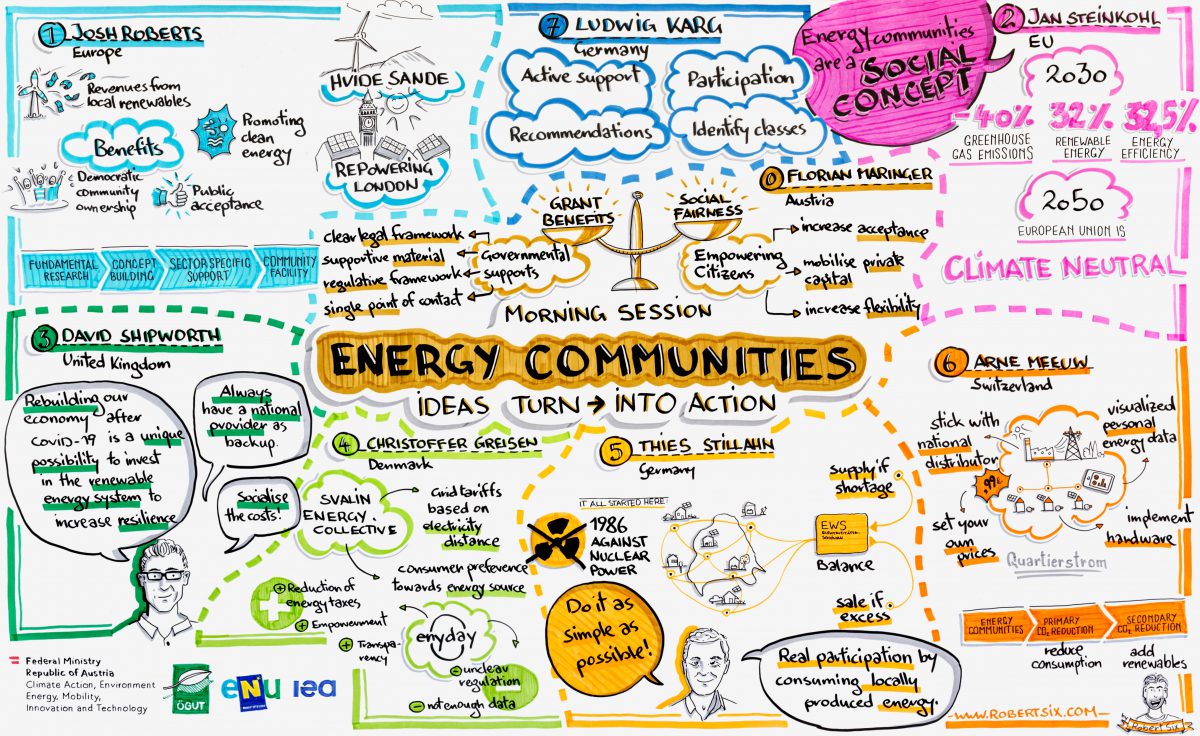 Morning session: Ideas turn into Action
The morning session was hosted by the IEA Experts’ Group on R&D Priority Setting (EGRD).
The aim of the half-day webinar was to provide insights into energy communities and their opportunities and challenges arising from current market and regulatory regimes. In particular, two questions were examined in the workshop:
– How can Renewable Energy Communities (RECs) contribute to a sustainable energy system?
– What are the unknowns of RECs – technical, political, social and economic?
To answer these questions, findings from existing initiatives and pilot projects were derived and discussed.
The session, which was attended by over 300 participants from 28 different countries, was opened by Florian Maringer (BMK). After introductory words of the EGRD Chair, Birte Holst Jørgensen, Josh Roberts (REScoop) addressed in his keynote the opportunities and challenges that arise from renewable energy cooperatives and gave recommendations for research & development to support the implementation of energy communities. Among other things, energy communities should be defined as non-commercial market actors and market barriers should be reduced. Sector-specific support for energy communities and the promotion of inclusion (gender aspects, low-income households etc.) also play an important role.
The energy policy context and the provisions regarding Energy Communities at European level were the subject of the presentation by Jan Steinkohl (European Commission). Energy Communities should be understood as a social rather than a technical concept. The necessary framework conditions to implement them include enabling all customers to participate and using tools that promote access to information and finance.
National implementations of energy communities and their drivers and barriers were then presented by David Shipworth (University College London, UK), Christoffer Greisen (DTU Electrical Engineering, Denmark), Thies Stillahn (Elektrizitätswerke Schönau, Germany) and Arne Meeuw (Exnaton, Switzerland).
According to the experts, the challenges lie in the upscaling of individual pilot projects, as they are not yet out of the demonstration stage. One of the key tasks for the future is also to align currently different values in different areas, such as economic and social values, through political and regulatory measures and incentives. It is necessary to investigate how the costs of infrastructure and the risks of local inequalities can be socialised and, on the other hand, how the formation of ghettos can be avoided. For future R&D activities the development of models for the provision of real-time data is mentioned among other things.
The experts agree on the involvement and acceptance of local stakeholders – this is crucial for overcoming barriers and for the success of the Energy Community. The best practice examples described show that energy communities can promote the use of renewable energy sources also in existing buildings and thus reduce CO2 emissions. Furthermore, the involvement of communities and their participants in the electricity market can have a positive impact on grid stabilization and flexibility management.
The morning session was concluded by the presentation of the European Task Force on Energy Communities by Ludwig Karg (B.A.U.M. Consult), who is working on an overview of the state of affairs in various EU countries and tries to show how the development of these can be further facilitated.
Afternoon Session: Different Flavours of Energy Communities
The afternoon session was hosted by Bridge 2020 and ERA Net – Smart Energy Systems and followed up on the reports of the European Task Force on Energy Communities.
Leen Peeters from „Th!nk E" gave a comprehensive overview of what is understood by the EU Directives as „Renewable Energy Community" or „Citizen Energy Community" and what the Directives aim at. Questions such as proximity, grid operation and grid tariffs were discussed.
These and other topics were subsequently addressed in 10 project presentations based on the 10 "Flavours" of energy communities described by the Task Force. 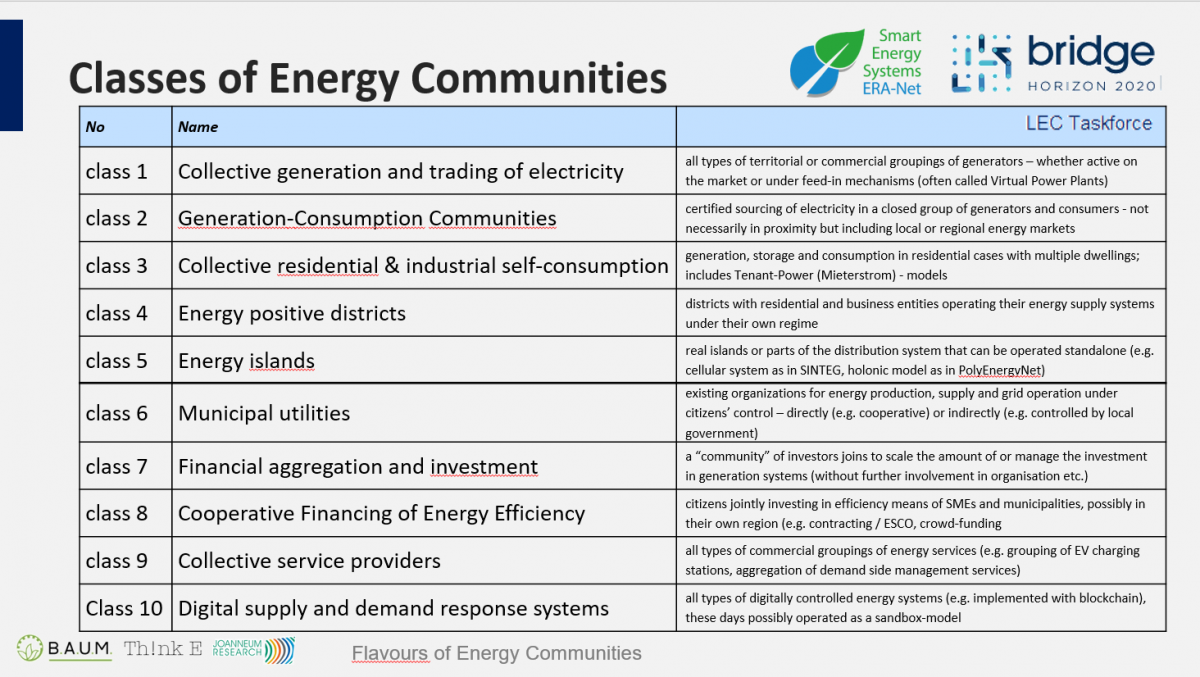 The 10 projects include:
Finally, it was explained how to join the Task Force and stay informed. If you are interested in the work of the Task Force on Energy Communities, join the ERA-Net Smart Energy Systems Knowledge Community