ERA-Net SG+ is an initiative of funding agencies from 21 European countries and regions. The initiative supports the coordination of joint funding of RDD projects in the area of smart grids and beyond. The initiative launched its first joint call for transnational projects in 2015, 21 projects with partners from 19 countries / regions being selected for funding. In 2016, 9 projects from 8 countries / regions were selected for funding under the Joint Call 2016 for transnational projects. The launch of the Joint Call 2017 in autumn 2017 had been decided and was announced at the event in Bucharest.

As in 2015, the Support Team organised a project event entailing a kick-off for the new projects from the ERA-Net SG+ Joint Call 2016. At the kick-off event, the new projects met their fellow projects and their contact points from the initiative. Projects of the 2015 and 2016 calls received a communication coaching and first insights and feedback from the annual ERA-Net SG+ project reporting.

Besides the internal part for the ERA-Net SG+ projects, the event entailed the public announcement of the ERA-Net SG+ Joint Call 2017 and the Knowledge Community Working Group meetings. The Knowledge Community facilitates the exchange between experts in the field of Smart Grids and enables project consortia to build their RDD efforts on results of former projects and existing knowledge. All Working Groups met in individual sessions to discuss the most important and urgent questions of their respective Living Documents and to find topics for the ERA-Net SG+ Spotlights and Policy Briefs. 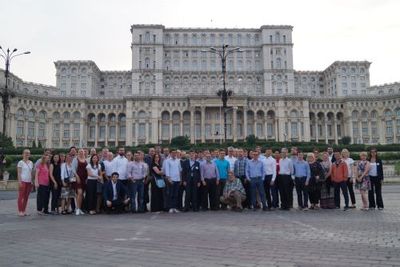 Day 1 of the ERA-Net SG+ event focused on the project Kick-Off for 2nd call projects. The projects were welcomed by Marius Mitroi from the Romanian Executive Agency for Higher Education, Research, Development and Innovation Funding (UEFISCDI). Subsequently, Ludwig Karg, Head of the ERA-Net SG+ Support Team, introduced them to the initiative and the Knowledge Community, including its recent and future developments. Also, the role of the Support Team and expera was explained during his introduction. Further, Karina Klepper member of the ERA-Net SG+ Call Management informed the projects on how the family of projects is being managed and about the role of the Call Management. Moreover, all projects introduced themselves with a 99-seconds presentation and subsequently positioned themselves within the broader scope of the initiative.
In the afternoon of the first day, the projects of the 1st Call joined the event for a session on the annual project reporting held by the Support Team and the Call Management. The reporting session included an introduction to the reporting for new projects, a face-to-face feedback for projects of the 1st ERA-Net SG+ Call and general feedback on the previously conducted annual project reporting of 2016. In parallel to the individual feedback sessions, a project matchmaking session took place focusing on the joint presentation of the ERA-Net SG+ family of projects and the Knowledge Community.

On Day 2, the communication coaching for all ERA-Net SG+ projects was held by members of the Support Team. Projects presented their project visions, which were subsequently being discussed.  Moreover, based on a stakeholder matrix the projects identified their key stakeholders, related opportunities and challenges, tools and channels to achieve their desired outcomes and communication targets. Eventually, communication practices of fellow projects having reported an outstanding number of communication activities were presented.
In the afternoon, the public part of the annual ERA-Net SG+ Event started with the announcement of the 3rd ERA-Net SG+ Call. The announcement began with a key note on ‘Place based innovation ecosystems’ by Adrian Curaj, General Director of the UEFISCDI and former Minister of National Education in Romania. Followed by a speech on ‘The EC framework for the execution of ERA-Net SG+’ by Aleksandra Kronberga, Policy Officer at New Energy Technologies' Unit, DG Energy at the European Commission.  Fredrik Lundström, vice-chair of the ERA-Net SG+ initiative announced afterwards officially the 3rd ERA-Net SG+ Call and Karina Klepper of the ERA-Net SG+ Call Management presented the requirements for applications under the 3rd Call. The Call announcement was finalized with an interactive session focusing on a live project development by Ludwig Karg together with members of the ERA-Net SG+ projects, Michael Kaisers, Tanja Sinozic, Bartlomiej Arendarski, supported by the Call Management and national agencies.
Afterwards, a common Meeting of the Knowledge Community Working Groups was held starting with an introduction to the Knowledge Community by Ludwig Karg and short presentations of each Working Group. In the afternoon, the first cross-cutting individual sessions of all Working Groups took place. The aim of the Working Group Meetings was to develop first inputs for possible spotlights and policy briefs of the Knowledge Community.

On the last day of the ERA-Net SG+ event, individual meetings of all Working Groups were held. The Working Group sessions terminated with an open door to enable exchange on the results among the Working Groups regarding spotlights and policy briefs. Generally, the Working Groups agreed to continue their cooperation and to further exchange their knowledge. The event was closed by a short speech and feedback session by Ludwig Karg.

All in all, the event was a great success, the ERA-Net SG+ funded projects started and deepened their cooperation to join forces among the ERA-Net SG+ family of projects. Within the Working Groups fruitful discussion and knowledge exchange took place contributing eventually to the overall Knowledge Community.